So I’ll leave yesterday’s recap and the general malaise I’m feeling about the Yankees (the losses, the injuries, the strikeouts, the bullpen) to Erik Boland of Newsday. Yes, I know it’ll get better, but right now the team is not firing on all cylinders and it shows. If the losing continues, will Aaron Boone last the season? Musing on that…. 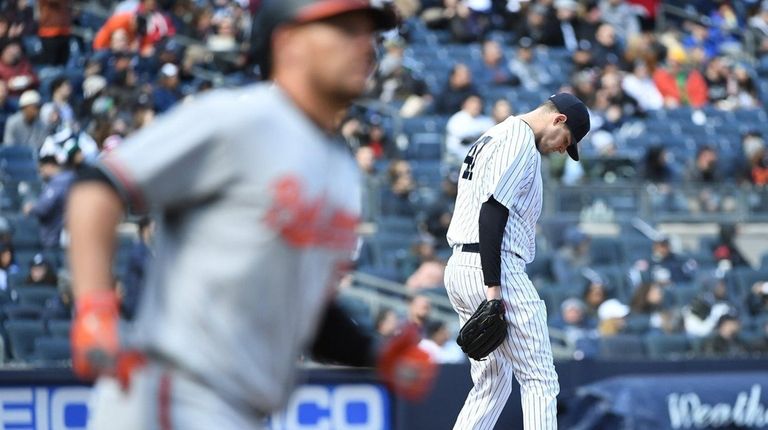 As ugly as it gets.

On a day when they scored five runs in knocking out the opposing starting pitcher after two-thirds of an inning, the Yankees fell to the Orioles, 8-7, in 12 innings at the Stadium — and failed to score after loading the bases with none out in their final at-bat.

Bearing the brunt of the frustration from what was left of the thoroughly iced crowd of 37,096 — the wind-chill by the end of the 4-hour, 48-minute game was 32 degrees — was Giancarlo Stanton, who endured another nightmare day at his new home ballpark.

Stanton went 0-for-7 with five strikeouts, his second five-strikeout game in the last six. The final one came with runners on first and second in the bottom of the 12th after Aaron Judge grounded into a 1-2-5 double play to short-circuit the rally. Stanton personally stranded nine runners and the Yankees left 14 on base as a team.

“They’re not going to cheer for that, so what do you expect?” Stanton said of the booing he heard all of Sunday and most of the homestand, one he finished 3-for-28 with 16 strikeouts.

“Any time you throw five up there in the first and then aren’t able to muster much after that, [it’s frustrating],” Aaron Boone said. “Had a chance to finish off a good homestand there and just couldn’t get much going.”

The Orioles scored off Adam Warren (0-1) in the 12th. With one out, Pedro Alvarez pinch hit for Danny Valencia and drew a walk. After Warren struck out Tim Beckham, Anthony Santander singled and Craig Gentry won an 11-pitch at-bat, bouncing a single to left to make it 8-7.

“Can’t put the guy on with a walk there,” Warren said. “That’s what’s most frustrating.”

Orioles righthander Brad Brach somehow worked out of a massive jam in the bottom of the 12th in earning his second save.

Austin Romine, who had three two-out RBI singles, and Didi Gregorius led off with walks against Brach. When Brett Gardner’s two-strike sacrifice bunt was booted by Brach, the Yankees had the bases loaded, but Judge hit a comebacker on an 0-and-1 splitter that Brach turned into a double play and Stanton struck out on four pitches.

“That’s the situation you want to be up in, but I hit it right back at him,” said Judge, who went 2-for-5 with two walks. “The one spot you don’t want to hit it.”

Lost a bit in Stanton’s bad day and the overall odd afternoon was Jordan Montgomery’s failure to hold the 5-0 lead he was given before throwing a pitch. He was pulled with one out in the fifth after Valencia made it 5-4 with a two-run homer to deep left-center on an 0-and-2 pitch. It was the Orioles’ 10th hit off Montgomery.

He still did far better than his counterpart, Baltimore righthander Mike Wright Jr., who allowed five runs (two earned) and five hits in two-thirds of an inning, including a two-run single by Miguel Andujar and an RBI double off the leftfield wall by Ronald Torreyes.

Santander’s two-out, two-run homer on a 3-and-0 pitch from Domingo German gave the Orioles a 7-6 lead in the seventh, but Romine’s single tied it in the bottom of the inning.

“We had a lot of opportunities and we couldn’t come through,” Gardner said. “Have to learn from it and forget about it. Off day tomorrow comes at a great time and then we’ll be ready for this week.”